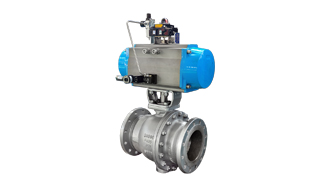 ② Because it will not get stuck during work (when there is no lubricant), it can be reliably used in corrosive media and low boiling liquids

③ In a large pressure and temperature range, complete sealing can be achieved;

⑤ The spherical closure can be positioned automatically at the boundary position;

⑥ The working medium is reliably sealed on both sides;

⑧The structure is compact, light weight, it can be considered as the most reasonable valve structure for the low temperature medium system;

⑩The closing part can bear the high pressure difference when closed.⑾ all welded body ball valve, which can be directly buried underground, make the valve internal parts from erosion, the highest service life can be up to 30 years, is the most ideal valve oil, natural gas pipeline.

①Because the main valve seat sealing material of the ball valve is polytetrafluoroethylene, it is inert to almost all chemical substances, and has a small coefficient of friction, stable performance, not easy to age, wide temperature range and excellent sealing performance. Comprehensive characteristics. However, the physical characteristics of PTFE, including higher expansion coefficient, sensitivity to cold flow, and poor thermal conductivity, require that the design of the valve seat seal must be based on these characteristics. Therefore, when the sealing material becomes hard, the reliability of the seal is impaired. Moreover, PTFE has a low temperature resistance grade and can only be used at temperatures below 180 ° C. Beyond this temperature, the sealing material will age. In the case of long-term use, it is generally not used at 120 ° C.

② Its regulating performance is worse than that of globe valves, especially pneumatic valves (or electric valves).

Plug valve: refers to a rotary valve with a plunger closure. Through 90 ° rotation, the channel port on the valve plug is communicated with or separated from the channel port on the valve body to open or close. The shape of the valve plug can be cylindrical or conical. Its principle is basically similar to the ball valve. The ball valve was developed on the basis of a plug valve. It is mainly used in oilfield exploitation and also used in petrochemical industry.

1. It is used for frequent operation, and it is quick and easy to open and close.

5. Limited by the installation direction, the flow direction of the medium can be arbitrary.

6. No vibration and low noise.

1. The cover is too large, which causes too much torque and is not flexible enough.

2, body weight, the size of the caliber is limited.

3. In actual use, if a large-size valve is used, an inverted plug structure must be used, which easily affects the sealing effect.

Previous: What is The Difference Between a Globe Valve and a Gate Valve?

Next: Analysis Of The Advantages And Disadvantages Of The Five Major Valves (On)