The gate valve refers to a valve in which the closing member (gate plate) moves in the vertical direction of the channel axis. It is mainly used as a cutting medium on the pipeline, that is, fully open or fully closed. Generally, the gate valve cannot be used for regulating flow. It can be used for low temperature pressure or high temperature and high pressure, and can be based on different materials of the valve. But the gate valve is generally not used in pipelines that transport mud and other media.

② The moment required for opening and closing is small;

③ It can be used on the ring network pipeline where the medium flows in two directions, that is, the flow direction of the medium is not restricted;

④ When fully opened, the sealing surface is less eroded by the working medium than the stop valve;

⑤ The structure is relatively simple, and the manufacturing process is good;

① The external dimensions and opening height are large, and the space required for installation is also large;

② During the opening and closing process, people on the sealing surface are relatively frictional, and the abrasion is relatively large, and it is easy to cause abrasion even at high temperatures;

③ Generally, the gate valve has two sealing surfaces, which adds some difficulties to processing, grinding and maintenance;

The butterfly valve is a valve that uses a disc-type opening and closing member to revolve around 90°to open, close, and adjust the fluid channel.

①Simple structure, small size, light weight, and low consumables, do not use in large-caliber valves;

③ It can be used for media with suspended solid particles, and it can also be used for powdery and granular media depending on the strength of the sealing surface. It can be used for two-way opening and closing and adjustment of ventilation and dust removal pipelines, and is widely used in gas pipelines and waterways of metallurgy, light industry, power, petrochemical systems, etc.

① The flow adjustment range is not large. When it is turned on to 30%, the flow will be over 95%;

② Due to the limitation of the structure of the butterfly valve and the sealing material, it should not be used in high temperature and high pressure piping systems. The general working temperature is below 300 ° C and below PN40;

③ The sealing performance is poor compared to ball valves and globe valves, so it is used in places where the sealing requirements are not very high. 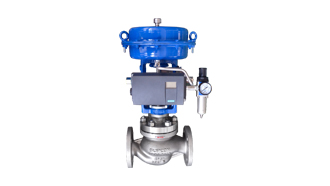 ① During the opening and closing process, the friction between the valve disc and the sealing surface of the valve body is smaller than that of the gate valve, so it is wear-resistant.

②The opening height is generally only 1/4 of the valve seat passage, so it is much smaller than the gate valve;

③Usually there is only one sealing surface on the valve body and valve disc, so the manufacturing process is better and it is easy to maintain;

④ Because its filler is generally a mixture of asbestos and graphite, its temperature resistance level is high. Generally, the steam valve uses a stop valve.

① Because the flow direction of the medium through the valve has changed, the minimum flow resistance of the stop valve is also higher than most other types of valves;

② Because the stroke is longer, the opening speed is slower than the ball valve.

Previous: Analysis Of The Advantages And Disadvantages Of The Five Major Valves (Down)

Next: Do You Know How To Use The Ball Valve?