The single-seat valve Baidu, as the name implies, is that the valve has only one spool and seat, and is throttled by adjusting the gap between the spool and seat. The single-seat valve has an excellent performance in low pressure and small diameter and has good sealing performance. Characteristics such as quick opening are determined by the shape of the spool. There are a spool and a seat in the valve body, which has the characteristics of small leakage. The valve has a large unbalanced force, and its allowable pressure difference is smaller than that of a double-seat valve. In the case of high-pressure difference and large diameter, it is best to match the valve positioner. Valves with a nominal diameter of ≥25mm have a double-guide structure, as long as the connection position of the valve stem and the valve core is changed, the gas can be opened or closed. 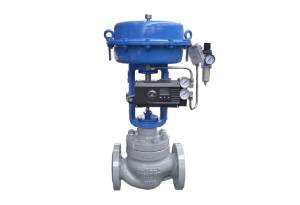 The single-seat regulating valve adopts a top guide structure and is equipped with a multi-spring actuator. The utility model has the advantages of compact structure, lightweight, sensitive action, S-shaped flow channel, small pressure drop loss, large valve capacity, accurate flow characteristics, and convenient disassembly and assembly. It is widely used to accurately control gas, liquid, steam, and other media, and the process parameters such as pressure, flow, temperature, and liquid level are kept at a given value. It is especially suitable for working occasions where the pressure difference between the front and back of the valve with small leakage is small.

Characteristics of the single-seat valve

3. The valve body is designed as an equal cross-section low-flow resistance flow channel according to the principles of hydrodynamics, and the rated flow coefficient is increased by 30%.

5. The actuator adopts a multi-spring structure, which reduces the height by 30% and the weight by 30%.

7. The regulating valve is equipped with a thermal insulation jacket, which is used in the occasions where the fluid is easy to crystallize and solidify and cause blockage after cooling.

Previous: What Is A Globe Control Valve?

Next: What Is a Single Seated Globe Valve ?