What Is a Globe Valve?

Globe valve, also known as a gate valve, is a force-sealed valve, so when the valve is closed, pressure must be applied to the clapper to force the sealing surface to not leak. When the medium enters the valve from below the valve flap, the resistance to be overcome by the operating force is the friction force between the stem and the packing and the thrust generated by the pressure of the medium. The force to close the valve is greater than the force to open the valve, so the stem The diameter should be large, otherwise, the failure to bend the valve stem will occur. According to the connection method, it is divided into three types: flange connection, screw connection, and welding connection. After the appearance of the self-sealing valve, the medium flow direction of the shut-off valve is changed into the valve cavity from above the valve flap. At this time, under the action of the medium pressure, the force of closing the valve is small, and the force of opening the valve is large, the diameter of the valve stem can be Decrease.

The globe valve, also known as the cut-off valve, is one of the most widely used valves. The reason why it is so popular is that the friction between the sealing surfaces during opening and closing is small, it is durable, the opening height is not large, and it is easy to manufacture. , Easy maintenance, not only suitable for medium and low pressure, but also suitable for high pressure. The closing principle of the globe valve is to rely on the pressure of the valve stem to make the sealing surface of the disc and the sealing surface of the valve seat closely fit together to prevent the circulation of the medium. China's valve "Sanhuan" once stipulated that the flow direction of the globe valve should be top-down, so it is directional during installation. The structural length of the globe valve is greater than that of the gate valve, and at the same time, the fluid resistance is large. During long-term operation, the reliability of the seal is not strong. 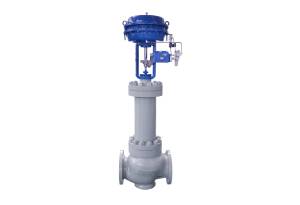 Globe control valve, as one of the most important shut-off valves, plays an important role in the aerospace field. As an important component of aerospace equipment, the shut-off valve realizes the functions of medium transportation, cut-off, and adjustment, and its sealing performance directly affects the safe and reliable operation of the aerospace equipment. Studying the influencing factors and influencing laws of the sealing characteristics of a typical globe valve has guiding significance for the structural design of the valve sealing pair, thereby improving the sealing performance and reliability of the valve.

Working principle and characteristics of the globe valve:

Globe valve supplier believes that: in terms of service life, the sealing surface of the globe valve is not easy to wear and scratch, and there is no relative sliding between the valve flap and the seat sealing surface during the valve opening and closing process, so the sealing surface is worn Compared with less abrasion, the service life of the sealing pair is improved. The shutoff valve has a small stroke during the fully closed process, and its height is relatively small compared to the valve. The disadvantage of the globe valve is that the opening and closing torque is large and it is difficult to achieve rapid opening and closing. Because the flow path in the valve body is relatively tortuous, the fluid flow resistance is large, resulting in a large loss of fluid power in the pipeline.

Previous: A Brief Introduction to the Control Valve (Part 1)

Next: Characteristics of Single Seat Valve