What Is Butterfly Valve

ㆍButterfly valves have been in use because of the end of the 18th century. James Watt made use of a butterfly valve in his steam engine prototype. With advances in materials and modern technology, butterfly valves can be made smaller as well as can hold up against higher temperatures. After the Second World War, synthetic rubber was used for seals, enabling butterfly valves to be made use of in more sectors. In 1969, James E. Hemphill patented an improvement in the butterfly valve that lowered the hydrodynamic torque required to transform the valve's outcome. 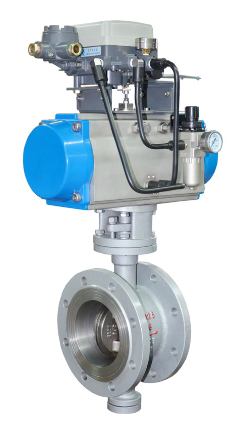 Below are the major butterfly valve components:

The valve body fits between the pipe flanges - the most common end connection types being flanged, double lug, and wafer types.

Attached to the valve body is the disc that functions as a gate that stops or throttles fluid flow; it can be considered equivalent to a gate in a gate valve, or a ball in a ball valve. The disc is typically bored to receive the stem or shaft. There are many variations in disc design, orientation, and material in order to improve flow, sealing, and/or operating torque. For example, Hawle's 9881k double eccentric disc is designed to reduce seal wear and “scuffing” as well as operating torque requirements. 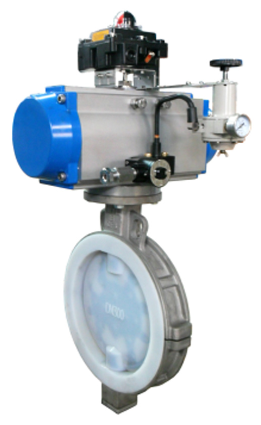 Lining the internal valve body is a strong elastomer or metal anti-leak seal that secures the disc in place in the closed position in order to achieve complete shutoff. The 9881k series' stainless steel weld filled and microfinished integral body seat ensures a corrosion and erosion resistant seat face. With this special type of seat design, it is possible to manufacture the valve drop tight according to EN12266 –A requirements.

The valve shaft, often also referred to as the stem, is the component that connects the disc to the actuation mechanism and transmits the torque through itself.

Seals are present at multiple interfaces within the valve to either ensure a tight seal during operation or to isolate the process media from the valve's internal components for a more flexible and cost-efficient design.

By eliminating interaction between the process media and the stem/shaft, the multiple O-ring shaft sealing system ensures a maintenance-free sealing for the entire life span of the valve. Besides, there are smaller more common components such as the bushings, bearings, and fasteners that are part of most other valve constructions as well. Details on some of the components on the actuation end, such as the handle, lever, gearbox, and handwheel will be covered in the actuation section.

We are butterfly valve manufacturers. If you are interested in our products, please feel free to contact us!

Previous: How To Maintain The Ball Valve

Next: What Is a Rotary Valve