1) Why is the Double seated valve easy to oscillate when working with a small opening?

For single-core, when the medium flows open type, the valve stability is good; when the medium is flow closed type, the valve stability is poor. The double-seat valve has two spools, the lower spool is in flow closed and the upper spool is in flow open. In this way, when working at a small opening, the flow-closed spool is likely to cause valve vibration. The valve is a double seat The reason why the valve cannot be used for small opening work.

2) Why can't the double seal valve be used as a shut-off valve?

The advantage of the double seat valve core is the force balance structure, which allows a large pressure difference, but its outstanding disadvantage is that the two sealing surfaces cannot be in good contact at the same time, resulting in large leakage. If it is artificially and compulsorily used for cutting off occasions, the effect is obviously not good. Even if many improvements (such as double-sealed sleeve valve) are made for it, it is not desirable.

The straight-stroke valve spool is throttling vertically, and the medium flows in and out horizontally, the flow path in the valve cavity will inevitably turn and turn, which makes the flow path of the valve quite complicated (the shape is like an inverted "S" shape). In this way, there are many dead zones, which provide space for the precipitation of the medium, which will cause a blockage if things go on like this. The direction of the throttling of the quarter-turn valve is the horizontal direction. The medium flows in and out horizontally. The valve is easy to take away the dirty medium. At the same time, the flow path is simple, and the space for medium precipitation is small, so the quarter-turn valve has the good anti-blocking performance. 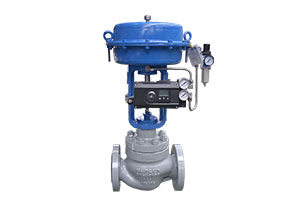 4) Why is the stem of the straight stroke control valve thinner?

It involves a simple mechanical principle: high sliding friction and low rolling friction. The valve stem of the straight-stroke valve moves up and down, and the packing is slightly compressed, it will pack the valve stem very tightly, resulting in a larger return difference. For this reason, the valve stem is designed to be very small, and the packing often uses PTFE packing with a small friction coefficient to reduce the backlash. However, the problem is that the valve stem is thin, which is easy to bend and the packing life is short. The best way to solve this problem is to use a travel valve stem, that is, a quarter-turn valve. Its stem is 2 to 3 times thicker than a straight-stroke valve stem. It also uses long-life graphite packing and stems stiffness. Good, the packing life is long, but the friction torque is small and the backlash is small.

5) Why is the cut-off pressure difference of the quarter-turn valve large?

The cut-off pressure difference of the quarter-turn valve is relatively large because the resultant force generated by the medium on the valve core or valve plate produces a very small moment on the rotating shaft, so it can withstand a large pressure difference.

6) Why use rubber-lined butterfly valves and fluorine-lined diaphragm valves for desalinated water media to have a short service life?

7) Why should hard seal be used as far as possible for shut-off valves?

The leakage of the shut-off valve is as low as possible. The leakage of the soft-sealed valve is the lowest. Of course, the shut-off effect is good, but it is not wear-resistant and has poor reliability. From the perspective of the double standards of small leakage, and reliable sealing, soft sealing is not as good as hard sealing. For example, the full-function ultra-light regulating valve, sealed and stacked with wear-resistant alloy protection, has high reliability and has a leakage rate of 10-7, which can already meet the requirements of shut-off valves.

8) Why does the sleeve valve replace the single-seat and double-seat valves but not get what you want?

9) Why is selection more important than calculation?

Compared with calculation and selection, the selection is much more important, and the control valve is much more complicated. Because the calculation is just a simple formula calculation, it does not lie in the accuracy of the formula itself, but in whether the given process parameters are accurate. The selection involves a lot of content, and a little carelessness will lead to improper selection, which not only causes waste of manpower, material, and financial resources, but also unsatisfactory use effect, which brings several use problems, such as reliability, life span, and operation Quality, etc.

10) Why is the use of piston actuators in pneumatic valves more and more?

For pneumatic valves, the pressure reducing valve piston actuator can make full use of the air source pressure, so that the size of the actuator is smaller than that of the diaphragm type, and the thrust is greater. The O-ring in the piston is also more reliable than the diaphragm, so It will be used more and more.

Next: Classification and Application of Ball Valves