Classification and Application of Ball Valves

The ball valve is mainly used to cut off, distribute and change the flow direction of the medium in the pipeline. The ball valve is a new type of valve widely used in recent years, it has the following advantages:

1. The fluid resistance is small, and its resistance coefficient is equal to that of a pipe section of the same length.

2. Convenient operation, fast opening, and closing, only need to rotate 90° from fully open to fully closed, which is convenient for remote control.

3. Convenient maintenance, the simple structure of the ball valve, and the sealing ring is generally movable, so it is convenient to disassemble and replace.

5. It is tight and reliable. At present, the sealing surface material of the ball valve is widely used in plastics with good sealing performance, and it has also been widely used in the vacuum system.

Ball valves have been widely used in petroleum, chemical, power generation, papermaking, atomic energy, aviation, rockets, and other sectors, as well as people's daily lives. The ball valve can be divided according to the structure: 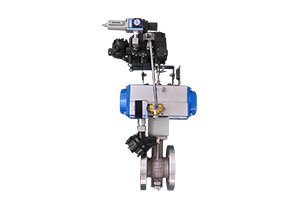 The ball of the ball valve is fixed and does not move when pressed. The fixed ball valve is equipped with a floating valve seat. After receiving the pressure of the medium, the valve seat will move, so that the sealing ring is pressed tightly on the ball to ensure sealing. Bearings are usually installed on the upper and lower shafts of the ball, and the operating torque is small, which is suitable for high pressure and large diameter valves. In order to reduce the operating torque of the ball valve and increase the reliability of the seal, oil-sealed ball valves have appeared in recent years. Special lubricating oil is injected between the sealing surfaces to form an oil film, which enhances the sealing performance and reduces the operating torque. , It is more suitable for high pressure and large diameter ball valves.

The ball of the ball valve is elastic. Both the ball and the valve seat sealing ring are made of metal materials, and the sealing specific pressure is very large. The pressure of the medium itself cannot meet the sealing requirements, and external force must be applied. This valve is suitable for high temperature and high-pressure media. The elastic sphere is made by opening an elastic groove on the lower end of the inner wall of the sphere to obtain elasticity. When closing the passage, use the wedge-shaped head of the valve stem to expand the ball and press the valve seat to seal. Loosen the wedge-shaped head before rotating the ball, and the ball will return to its original shape so that there is a small gap between the ball and the valve seat, which can reduce the friction of the sealing surface and the operating torque. Ball valves can be divided into straight-through type, three-way type, and right-angle type according to their channel position. The latter two ball valves are used to distribute the medium and change the flow direction of the medium.

The ball of the ball valve is floating. Under the action of the medium pressure, the ball can produce a certain displacement and press tightly on the sealing surface of the outlet end to ensure that the outlet end is sealed. The floating ball valve has a simple structure and good sealing performance, but the load of the working medium on the ball is all transmitted to the outlet sealing ring. Therefore, it is necessary to consider whether the sealing ring material can withstand the working load of the spherical medium. This structure is widely used in medium and low-pressure ball valves. Ball valves are widely used in irrigation systems, mainly at the inlet of branch pipes. The ball valve has a simple structure, small size, and low resistance to water flow. The disadvantage is that it opens or closes too quickly, which will produce a water hammer in the pipeline (the pressure will increase when the water speed in the pipeline changes suddenly). Therefore, it is not appropriate to use ball valves on the main pipes and can be used for flushing on the stem and branch pipes or at their ends, with a good flushing and drainage effect.

Ball valves are divided into O type ball valves and v shaped ball valves. The O-type ball valve adopts a floating structure, the core is a precision casting, the surface is plated with hard chromium, and the valve seat is made of reinforced polytetrafluoroethylene. The diameter of the flow channel is the same as that of the pipe. Leakage, generally used as an on-off valve, especially suitable for high-viscosity, fiber-containing, granular media; V-shaped ball valve adopts a fixed structure, with a V-shaped cut on the ball core, which can achieve proportional adjustment, and the flow characteristics are approximately equal percentages.

We are O type ball valve manufacturer. If you are interested in our products, please feel free to contact us.