This is the most commonly used connection in valves. According to the shape of the joint surface, it can be divided into the following types:

3. Tongue and groove type: Washers with large plastic deformation can be used, which are widely used in corrosive media and have a good sealing effect.

5. Lens type: the gasket is a lens shape, made of metal. For high pressure globe control valve with high working pressure ≥100kg / cm2, or high-temperature valves.

6. O-ring type: This is a newer type of flange connection. It is developed with the appearance of various rubber O-rings. It is more reliable in sealing effect than ordinary flat washers.

Second, the clip connection: a bolt directly to the valve and the two ends of the pipe through the connection form.

Fourth, threaded connection: This is a simple connection method, often used for small valves, such as cut-off ball valve. There are two cases:

1. Direct sealing: the internal and external threads directly act as a seal. In order to ensure that the joints are not leaking, they are often filled with lead oil, linen, and Teflon raw material tapes. Among them, Teflon raw material tapes are widely used. This material has good corrosion resistance and excellent sealing effect. It is easy to use and store. It can be removed completely when disassembling because it is a non-adhesive film, which is far superior to lead oil and linen.

2. Indirect sealing: The screw tightening force is transmitted to the gasket between the two planes, so that the gasket plays a sealing role.

The ferrule connection has only been developed in China in recent years. Its connection and sealing principle is that when the nut is tightened, the ferrule is under pressure, causing its blade to bite into the outer wall of the pipe, and the outer cone of the ferrule is connected to the joint under pressure. Since the tapered surface in the body is in close contact, leakage can be reliably prevented. 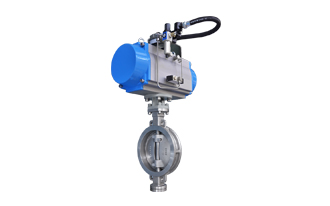 The advantages of this form of connection are:

3, can choose a variety of materials, suitable for anti-corrosion;4. The processing accuracy is not high; it is convenient for high-altitude installation.

At present, the ferrule connection form has been adopted in some small-caliber valve products in China.

Six, clamp connections: This is a fast connection method, it takes only two bolts for frequent removal and low pressure valves.

The above various connection forms all use external force to offset the pressure of the medium to achieve sealing. The following describes the self-tightening connection using the medium pressure. Its sealing ring is installed at the inner cone, and the side facing the medium forms an angle. The pressure of the medium is transmitted to the inner cone and then to the sealing ring. On the cone surface at a certain angle, two component forces are generated, one with The center line of the regulating valve body is parallel outward, and the other is pressed toward the inner wall of the valve body. The latter component is the self-tightening force. The greater the medium pressure, the greater the self-tightening force. Therefore, this connection form is suitable for high-pressure valves. It saves a lot of material and manpower than flange connection, but also needs a certain pre-tensioning force, so that it can be used reliably when the pressure in the valve is not high. Valves made using the principle of self-tight sealing are generally high pressure valves.

There are many types of valve connections, such as small valves that do not have to be removed and welded to the pipe; some non-metallic valves use socket connections, and so on. Valve users should be treated according to specific circumstances.

Next: Classification of valves