What is the Working Principle of Globe Valve?

Globe valve supplier introduces you: Globe valve, also known as shut-off valve, is one of the most widely used valves. It is popular because of friction between sealing surfaces during opening and closing Low force, relatively durable, low opening height, easy manufacture, and convenient maintenance. It is not only suitable for medium and low pressure, but also for high pressure. The closing principle of the shut-off valve is to rely on the pressure of the valve rod to make the sealing surface of the valve disc and the sealing surface of the valve seat close to prevent the medium from flowing. China's valve "three chemical supply" has stipulated that the flow direction of the shut-off valve will always be used from top to bottom, so there is directionality during installation. The structure of the shut-off valve is longer than the gate valve, and the fluid resistance is large. The sealing reliability is not strong during long-term operation.

Globe valve, as one of the most important shut-off valves, plays an important role in the aerospace field. As an important component of aerospace equipment, the shut-off valve realizes the functions of media transportation, cut-off, adjustment, etc. Its sealing performance directly affects the safe and reliable operation of aerospace equipment. Studying the influencing factors and influencing laws of typical globe valve sealing characteristics has guiding significance for the structural design of the valve sealing pair, thereby improving the sealing performance and reliability of the valve. 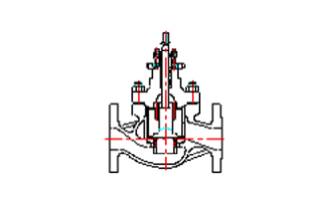 The sealing pair of the stop valve is composed of a valve disc sealing surface and a valve seat sealing surface. The valve stem drives the valve disc to move vertically along the centerline of the valve seat. During the opening and closing process of the shut-off valve, the opening height is small, the flow rate is easy to adjust, and the manufacturing and maintenance are convenient, and the pressure is applied in a wide range.

Compared with the other commonly used shut-off valves in industrial production, one by one, the stop valve is simpler in structure than the former, which is easier to manufacture and maintain. In terms of service life, the sealing surface of the shut-off valve is not easy to wear and abrasion, and there is no relative sliding between the valve disc and the seat sealing surface during the valve opening and closing process. The service life of the pair of shut-off valves in the fully closed process is small, and the height of the valve is smaller than that of the valve. The disadvantage of the globe valve is that the opening and closing torque is large and it is difficult to achieve rapid opening and closing. Because the flow passage in the valve is relatively tortuous, the fluid flow resistance is large, resulting in a large loss of fluid power in the pipeline.

>> Shop for our globe valves here

The category of globe valve

1. Globe valve can be divided into:

(4) Plunger stop valve: The plunger stop valve is a kind of deformed conventional stop valve. The valve disc and valve seat generally adopt the plunger principle. The disc is polished into the plunger and connected to the valve stem. The seal is achieved by two elastic sleeves on the plunger. The two elastic seals are separated by a light ring, which is compressed by the load exerted on the bonnet by the nut. The elastic ring is replaceable and can be made of various materials. Valves are mainly used to connect or cut off pipes. However, with a special plunger or ring, the plunger shut-off valve can also be used to regulate the flow.

2. According to the position of the thread on the valve stem, the globe valve can be divided into:

(1)External spiral stem stop valve: The thread on the stem is located outside the valve body. The valve stem is not corroded by the medium and is convenient for lubrication. This structure is very common.

(2) Internal thread stem stop valve: The thread on the stem is located in the valve body. The thread is in direct contact with the medium and is easily corroded. This structure cannot be lubricated. This structure is suitable for small diameter and low-temperature occasions.

We are a globe valve supplier. If you are interested in our products, please contact us now!

Previous: Teach You How To Select a Valve

Next: What is The Difference Between a Globe Valve and a Gate Valve?