How do Self Operated Valves Work? 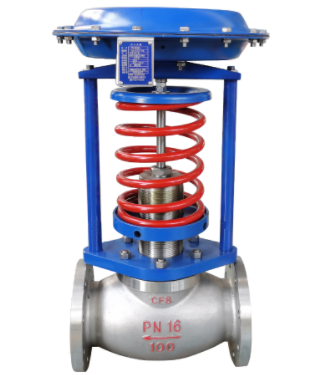 Although not a type of actuator itself, a form of actuation worthy of mention is where the process fluid pressure itself actuates a valve mechanism.

The self-operating valve principle may be used in throttling applications or on/off applications, in gas or liquid services alike.

The process fluid may be directly tubed to the actuating element (diaphragm or piston), or passed through a small mechanism called a pilot to modulate that pressure before reaching the valve actuator. This latter design allows the main valve’s motion to be controlled by an adjustable device (the pilot).

A spring tries to force the plug off the seat, while “feedback” gas pressure from the downstream side of the valve acts against a flexible diaphragm to move the plug toward the seat.

This spring establishes the pressure-regulating “setpoint” value for the regulator. If a different setpoint is desired, the spring must be replaced with one having a different stiffness.

Here, a simple manual adjustment pressure regulator serves as the “pilot” device to send a loading pressure to the top of the main regulator’s actuating diaphragm:

Instead of a stiff internal spring establishing the regulator’s pressure setpoint, the externally supplied loading pressure does that.

Since this loading pressure is easily adjusted by turning the knob on the manual-set pressure regulator, the main regulator now becomes adjustable as well. The pilot mechanism controls the main gas throttling mechanism, hence the name pilot.

This next self-operated valve is used in a liquid (wastewater) service rather than gas:

A consumer-grade application for pilot-operated valves is irrigation system control, where the solenoid valves used to switch water flow on and off to sprinkler heads use pilot mechanisms rather than operate the valve mechanism directly with magnetic force.

A small solenoid valve opens and closes to send water pressure to an actuating diaphragm, which then operates the larger valve mechanism to start and stop the flow of water to the sprinkler.

A special case of self-operated valve is the Pressure Relief Valve (PRV) or Pressure Safety Valve (PSV). These valves are normally shut, opening only when sufficient fluid pressure develops across them to relieve that process fluid pressure and thereby protect the pipes and vessels upstream.

Relief valves using pilots have the advantage of being widely adjustable, whereas non-pilot safety valves usually have limited adjustment ranges.

It is a new type of control valve. Compared with the manual control valve, its advantage is that it can be adjusted automatically; compared to the electric control valve, its advantage is that it does not require external power. Application practice has proved that in closed water circulation systems (such as hot water heating systems, air conditioning and chilled water systems), the correct use of this valve can easily achieve system flow distribution; can achieve system dynamic balance; can greatly simplify the system The debugging work; can stabilize the working state of the pump.

We are a Self-operated Control Valve supplier, please feel free to contact us if you need them!

Previous: What is the Best Type of Flow Control Valve for Your Application?

Next: Considerations When Choosing a Butterfly Valve