How to Choose the Right Regulating Valve? (Part 2)

The angle control valve is a single-seat control valve with a special valve body structure. It is suitable for specific piping and fluid applications. It changes the straight-through valve body to an angled (equivalent to an elbow) valve body, which throttles and receives force. The form is completely equivalent to the single-seat regulating valve. It retains the characteristics of small leakage and allowable pressure difference of the single-seat regulating valve. In addition, due to its simple flow path and "self-cleaning" performance, it can be applied to dirty media and can be further improved to an anti-blocking angle valve, which is suitable for working conditions containing suspended particles, especially in the installation space. It is especially suitable for restricted occasions. 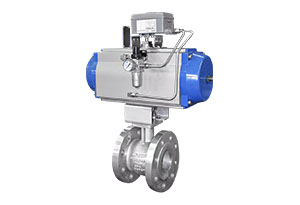 The diaphragm regulating valve is composed of a corrosion-resistant diaphragm and a valve body lined with corrosion-resistant material. The flow path is simple, and it is suitable for two-position cut-off occasions for dirty media and weakly corrosive media. It is one of the earliest regulating valves. Due to its approximate quick-opening flow characteristics, the regulation quality is poor, and it is also affected by the material of the diaphragm and lining. It cannot be used in high temperature and high-pressure conditions. The general working pressure is ≤1.6MPa. Temperature ≤150℃, coupled with the shortcomings of easy damage to the diaphragm and short life, there are not many occasions for use now.

The butterfly valve is equivalent to a section of the pipeline as the valve body, with a valve plate throttling in the center. It is the most common rotary regulating valve used for control. It is suitable for low pressure, medium pressure, or occasions of high static pressure and large flow in rare cases, but the pressure difference is limited. It is small in size and light in weight, 4-10 times lighter than spherical control valves of the same caliber, and has a small ratio of caliber to price. It is especially suitable for large caliber occasions. The larger the caliber of the regulating valve, the more prominent this feature. Generally, when DN>300mm, it is usually completed by Plastic Lined Butterfly Valve.

The ball valve is a mature and old product, divided into "O" shape and "V" shape ball valve. The flow path is the simplest, the flow resistance is the smallest, the loss is the smallest, and the "self-cleaning" performance is the best. "O"-shaped ball valve is a kind of non-resistance regulating valve. Compared with the specifications, it has the largest rated flow coefficient. It is often used in large flow and dirty media. The v shaped Ball Valve provides approximate logarithmic flow. Features and large adjustable ratio, the "V"-shaped ball core and the valve seat produce a shearing effect when relative rotation, especially suitable for high viscosity, suspension flow, pulp, and other dirty, fiber-containing media adjustment and cutting. The price of the ball valve is more expensive.

Also known as the cam flex valve, it combines the advantages of ball valves and butterfly valves. It has a simple flow path, a good "self-cleaning" performance, and good adjustment performance. It is suitable for crystallization, stuttering, and dirty media. The valve body is small in size and light in weight. It can be assembled flexibly according to the site installation position without replacing any parts; the rated flow coefficient is large, 10% to 30% larger than the single-seat and double-seat control valves of the same caliber, and the adjustable ratio can reach 100:1; The seal is reliable. Due to the disturbing effect of the spool support arm and the eccentric rotation of the spool spherical surface, the required operating torque is reduced and some asymmetry is compensated. It can operate stably underflow opening, flow closing, and high pressure difference; When adjusting, a positioner is required, and the linear or equal percentage flow characteristics can be easily obtained by changing the position of the convex plate in the positioner.

These special types of regulating valves are all special valves used in the production process of special technology or a specific application, and they are non-standard. They have the characteristics of complex working conditions, high use requirements, and small production batches. These control valves are usually evolved and improved from standard types of products in response to use requirements. Therefore, the basic type should be determined first based on non-specialty, and then the corresponding deformation type and material should be determined for the particularity.

Previous: How to Choose the Right Regulating Valve? (Part 3)

Next: How to Choose the Right Regulating Valve? (Part 1)