What is the Difference in Structure and Performance Between Ball Valve and Butterfly Valve?

Among the known valves, ball valves and butterfly valves are probably the two most widely used and widely used valves in today's valves. The two are simple and easy to operate and play a role of blocking and cutting off the pipeline medium. Today O-type ball valve supplier will talk about the difference between the two:

2.Sealing and caliber are different

The butterfly valve is characterized by fast opening and closing speed, simple structure and low cost, but its tightness and pressure bearing capacity are not good. The ball valve can be quickly opened and closed, and can be completely sealed under large pressure and temperature. So comparatively speaking, the sealing performance of the ball valve is better than that of the butterfly valve. However, due to the limitation of the volume and the opening and closing resistance, the ball valve is difficult to achieve a large caliber.

From the perspective of operating temperature, due to the sealing material and structure, the ball valve is not suitable for the steam medium, and the butterfly valve can be used for the conventional saturated steam medium for heating (below 350 degrees). 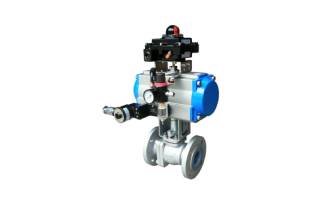 1. The fluid resistance is small, and the resistance coefficient is equal to the pipe length of the same length.

3. It is tight and reliable. The sealing surface material of the ball valve is widely used in plastic and has good sealing performance. It has also been widely used in vacuum systems.

4.Easy operation, fast opening and closing, only need to rotate 90 ° from fully open to fully closed, which is convenient for long-distance control.

5. Easy maintenance, simple structure of ball valve, seal ring is usually movable, and it is more convenient to disassemble and replace.

7. Wide range of application, from small diameter to several millimeters, large to several meters, from high vacuum to high pressure can be applied.

Previous: 14 Contraindications for Valve Installation and Their Release Measures (Part 1)

Next: Features and Application of Ordinary Valves